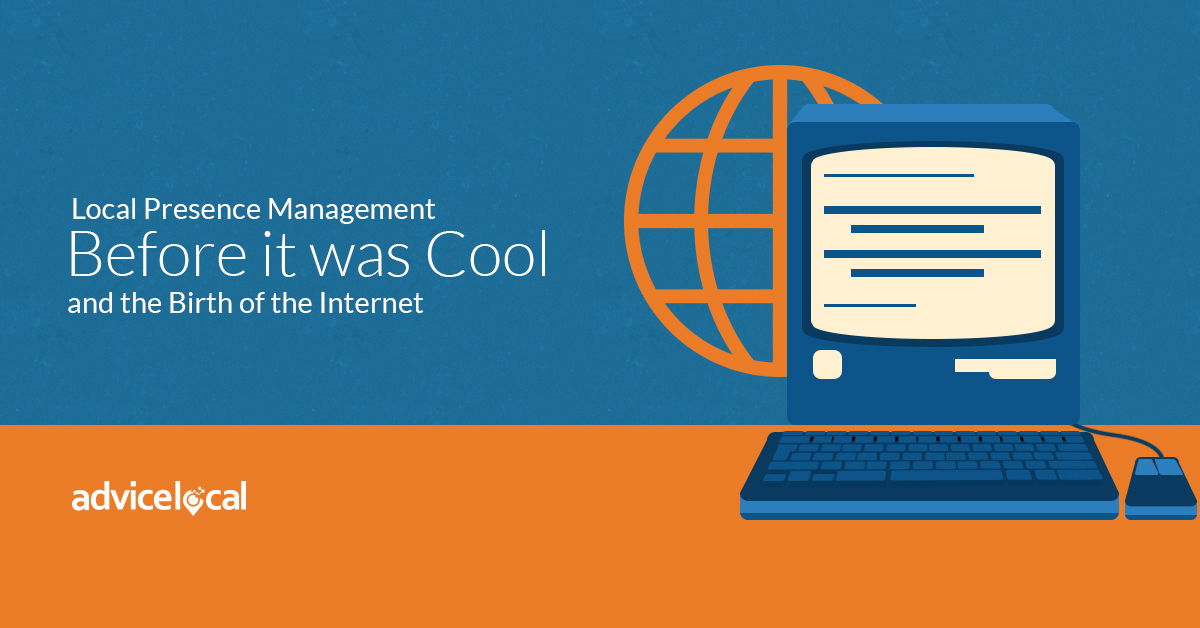 Long before the Internet was a viable entity, before “search” referred to an industry and any of us used Google as a verb, consumers had to find and connect with local businesses in traditional ways. For many, that meant letting their “fingers do the walking” to find a phone number to call to ensure the “ABC Dry Cleaners” on Third was indeed the correct location, that it was open and ready to receive your laundry for that week.

Local presence management for businesses has always been an important factor; consumers can’t interact with you if they can’t find you. But the Internet, and now especially mobile web, has greatly increased the importance of having the correct data, accessible at any time, to your target audiences.

A Historical Look at Local Presence and its Issues

Think back to what life was like before the World Wide Web was developed in 1991.

When a consumer wanted to find a business, it was a matter of taking hold of the mammoth yellow or white phone book and hoping for the best. When a business received their phone number, they were listed in the phone book. For those who don’t remember, the listings included a name, address and phone number; but if any of that information was incorrect, how was the consumer to know?

If a business wanted to increase potential foot traffic, they went the extra mile and placed an ad in the phone book or in a newspaper, which could be quite costly. This presented another problem for small business owners and marketers who helped them; how would their ad stand out against mounting competition in a similar category? (This sounds all too familiar – Google Local 3-pack anyone?)

Remember phone books were only reprinted once a year; consider the possible negative impact on a business’s local presence from a minor citation misprint or a bad data submission. A consumer, new to an area, attempting to call ABC Dry Cleaners on Third, is connected to 123 Laundry & Dry Cleaning in Uptown, instead because of the bad citation. In this example, one business saw a decline while the other reaped the benefit.

After calling to confirm the location and business hours, the consumer had to actually FIND the physical location. Dust off your Mapsco! Similar to phone books, maps did not have frequent updates and if your business was in a new development, with new streets, there was a wait before your location was seen by map users.

When our hypothetical consumer arrived in-store they were most likely met with another local presence management/ marketing tactic when they were given a pen, calendar, magnet, etc. with the name, address and phone number (NAP data) for ABC Dry Cleaners. These little reminders were expected business expenses, which served as consumer touchpoints.

Hopefully each time they reached for the branded collateral, it would reinforce the good experience they had with a business. And for those who went above and beyond, a direct mailer “thank you” note was another opportunity to market their way into the consumer’s consciousness.

As you can see, there was a long, laborious process involved with maintaining local presence back in the day – and I didn’t even touch on all the connection points that needed to be made to make a single update… but I bet you get the point. But 1991 happened, and the Web gave way to new functionality that would change the way business is done. Let’s take a look.

Let’s continue our look through history with a brief review of key points along the Internet’s timeline:

1977-1979 – the Internet Protocol suite is tested and IPv4, becomes the dominant protocol for the Internet

1984 – the first domain-name service is created

As you can see adoption of the Internet by the general public was fast; the adoption rate for the telephone was at a snail’s pace in comparison. It took nearly 90 years for the phone to reach approximately 160 million worldwide users. With the availability of home personal computers and the race for better technology in the 90s, the Internet reached 150 million worldwide users in less than nine years!

In the years since its inception, major players like Google began to define what the Internet is and how we use it. The search industry was born, a focus on a great consumer experience became priority and last year, for the first time, search on mobile devices surpassed search on desktop units.

Local Presence Management in the Present 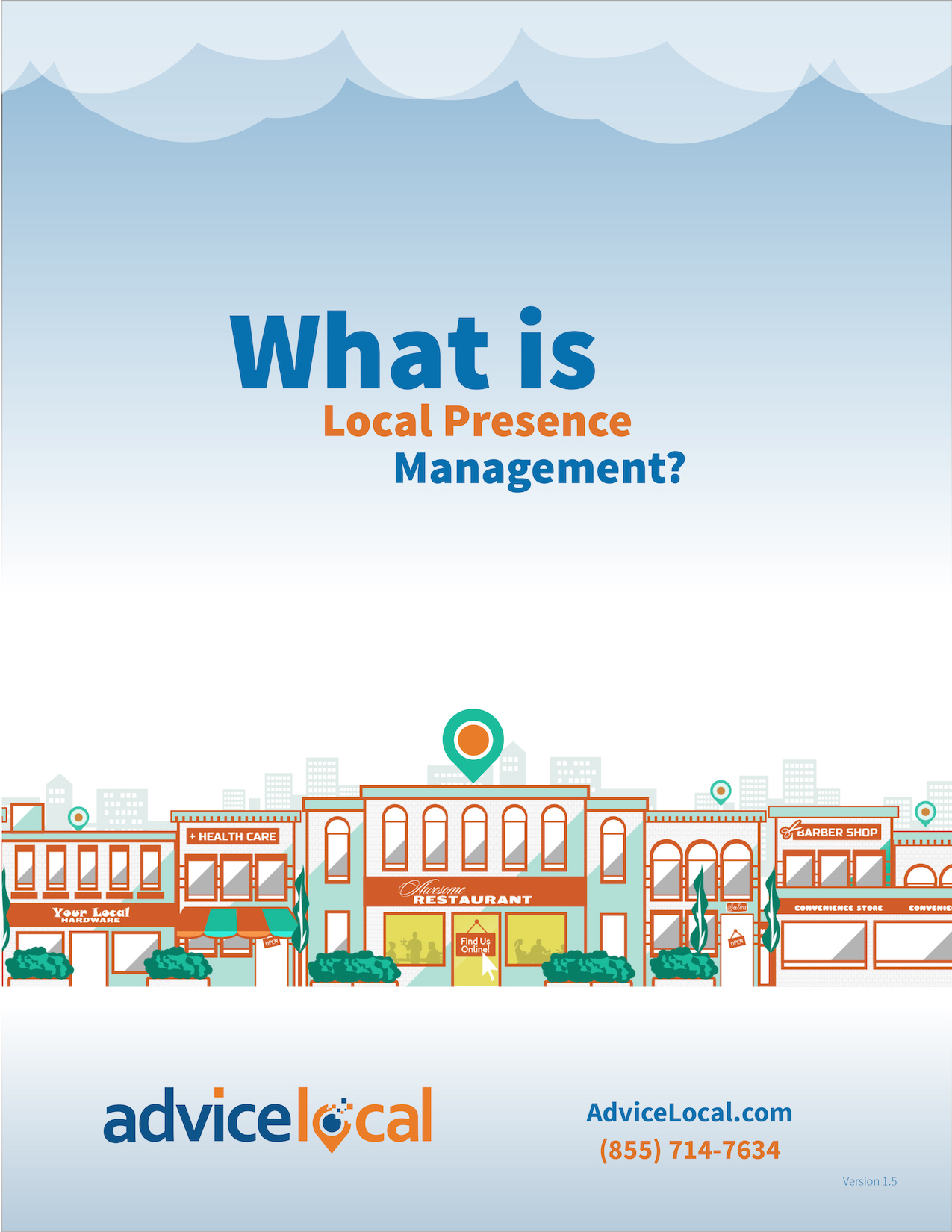 Welcome back to the 21st century, where we are fortunate enough to have worked out many of local presence management’s issues. A quick search now, not only pulls up ABC Dry Cleaners, but their business hours, a link to their website, a company logo and a map of how to get there, too. Thank you, Internet!

Here’s how we get to our definition of modern local presence management:

Local Presence – This refers to all of the information, surrounding a business’s actual physical location, such as where to find it on a map, business hours and its NAP data.

Digital Presence – This refers to all of the information, processes and marketing for a business, which is presented online. Consumers usually conduct a Google search to find this information, which includes the website, any social media pages, blogs, online reviews from multiple sites, any search engine optimization (SEO) done, and pay-per-click (PPC) advertising just to name a few.

Local Presence Management – This refers to the seamless merging of local and online presence, to positively affect and cultivate a brand’s or business’s presence in search engines.

And today we have this all down to a science, with the intention of helping businesses and brands succeed in the digital landscape.

Still, I’m often asked, “What’s local presence management all about?” so I created this  ePaper, “What is Local Presence Management?” in response. I want to see you succeed beyond your wildest dreams and I know LPM is the way to help you get there.

What old school examples do you have of local presence management? What’s your favorite part about modern LPM? Let’s discuss.

Be sure and come back each week for more from the #QueenofLocalSEO.